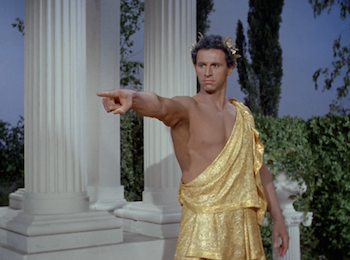 It starts off as just a peaceful morning on board the starship Enterprise when suddenly, as they approach Pollux IV, a giant green hand pops up and holds the Enterprise in place by the saucer section. While everyone is trying to figure out what the hell is going on, a face wearing a gold crown of laurel leaves materializes, claiming to be Apollo, and name dropping those such as Agamemnon, Hector and Odysseus. He insists some crew members come down to the planet to visit him. He specifies that Spock not come as he reminds him too much of Pan.

So, it's Kirk, Chekov, Bones, Scotty and Lt. Carolyn Palamas to beam down. Carolyn, it should be noted does not wear red though we've never seen her before or will again. (She survives though.) Apollo makes his grand appearance, giving everyone the good news. They're all going to leave that stuffy old starship, come down to this crisp, green planet and worship him! Won't that be fun? Nah, didn't think Kirk would agree.

Apollo makes show of his cosmic powers and demands respect that he just isn't getting. He woos Carolyn, and is not wholly unsuccessful in turning her. However, Kirk convinces her that it isn't right to condemn everyone on the Enterprise to a life they don't want, even if she is made a goddess. She gives Apollo the shaft, and he throws the mother of all tantrums. In the meantime, Spock has managed to locate Apollo's power source (his temple), and destroys it. Broken and defeated, Apollo follows his fellow gods into oblivion. While Apollo was unable to get the worship he desired, he did manage to inspire pity.

Note: This episode got something of a sequel, courtesy of fan-made web-series Star Trek Continues, entitled "Pilgrim of Eternity." It features Apollo's original actor in this episode, Michael Forest, doing a Role Reprise.

Who Mourns for Tropes?: