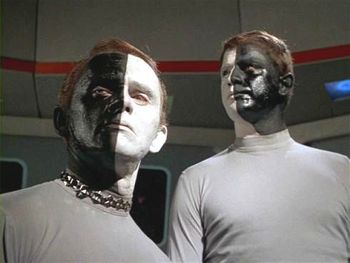 Bele and Lokai give new meaning to "Black-and-White Insanity".
Advertisement:

While on route to the planet Arianus on a mission to decontaminate its polluted atmosphere, the Enterprise intercepts a Federation shuttle that had been reported stolen from Starbase 4. After disabling the shuttle, its alien pilot is brought on board: though humanoid, said pilot's skin is half ink black, half chalk white, right down the middle. Spock is extremely intrigued, claiming said coloration goes against all genetic theory and that the pilot might be one of a kind.

The captive pilot wakes up and introduces himself as Lokai (Lou Antonio), from the distant non-Federation planet Cheron. However, when asked as to why he stole the shuttle, he becomes evasive and refuses to explain further. After contacting Starbase 4 and informing them they will return the shuttle as soon as the Arianus mission is complete, the Enterprise is suddenly approached by an invisible alien ship on collision course. However instead of colliding, it disintegrates and its pilot suddenly appears on the bridge. Said pilot is apparently the same species as Lokai, having the exact same skin colors only reversed (so much for "one of a kind"). The alien introduces himself as Bele (Frank Gorshin), also from Cheron and Chief Officer of its Commission on Political Traitors. Bele claims Lokai is a fugitive convicted of treason and he has been sent to apprehend him.

The two aliens meet and get into a heated argument, with Lokai claiming Bele's race has enslaved Lokai's and planning on their genocide while Bele claims Lokai's people were "savages" that were "educated" by his own people, and that Lokai has caused his race to engage in violent revolution resulting in the deaths of thousands. Lokai asks Kirk for political asylum while Bele demands that Lokai be handed over to his custody. Kirk refuses to take sides claiming that Lokai is a prisoner of Starfleet (and thus ineligible for asylum) over the shuttle's theft and since Cheron is not a Federation planet Lokai cannot be extradited there. He adds that as soon as the Arianus mission is complete, they will have to make their case at Starbase 4. Bele is displeased at this and uses some mysterious power to take control of the ship, claiming he has been chasing Lokai for "fifty thousand of your terrestrial years" and he won't give up now.

After phasers prove to be useless, Kirk threatens to set off the Self-Destruct Mechanism if he doesn't return command of the ship. Bele thinks Kirk is bluffing to which Kirk responds by ordering the verification of the self destruct sequence by the vocal commands of himself, Spock and Scotty. Only a few seconds away from the end of the countdown does Bele release control. He adds that he will allow the Arianus mission to be completed and requests that he be allowed to bring Lokai to Cheron as soon as it's done. Kirk makes no promises but allows both to walk freely within the ship.

En route to Arianus, Lokai makes his case with the crew, claiming humans have no idea what it's like to be persecuted, and not being impressed when he is informed that persecution did occur in the distant past of human history but mankind has evolved past it. Meanwhile Bele is relayed a message from Starfleet command claiming that Lokai will stand trial on Starbase 4 and that it's likely that he will end up turned over to Bele's custody. Bele doesn't believe it, claiming Lokai will manage to manipulate everyone into releasing him and calling him "an inferior breed". When Spock calls him of the same breed as Bele, Bele points out the difference that Lokai and his "people" are white on the right side while Bele's race is white on the left. Spock's claims that Cheron's people can overcome such differences just like Vulcan once did are interrupted by the Enterprise arriving at Arianus.

The decontamination procedure goes without problems. However, as soon as the course is changed to Starbase 4, Bele hijacks the ship again, this time making sure to burn out the self destruct controls, leaving Kirk and the crew no choice but stand around helplessly while the ship is taken to Cheron. Lokai appears on the bridge outraged at this development and fights Bele, threatening to tear the ship apart though Kirk calms them down. Kirk is given control back once Cheron is in visual range. However, the surface scans pick up a grim sight: completely empty cities filled with unburied bodies, animals and vegetation encroaching on them. Every sapient life form on Cheron is dead, having wiped each other out in a giant race war. The shocked Lokai and Bele promptly turn on each other again, accusing the other's race of being responsible. Kirk pleads with them to stop fighting, claiming that their hatreds are pointless now and that they're welcome to live in the Federation. Kirk's pleas fall on deaf ears and Lokai and Bele take the fight down to the destroyed planet, leaving the crew to ponder on the pointlessness of it all:

Sulu: But the cause they fought about no longer exists. Does it matter now which one was right?
Spock: All that matters to them is their hate.
Uhura: Do you suppose that's all they ever had, sir?
Kirk: No, but that's all they have left. [dejected] Warp factor 4, Mr. Sulu. Starbase...4.

Let These Be Your Last Tropes:

Kirk, Spock, and Scotty order the U.S.S. Enterprise to self-destruct.

Kirk, Spock, and Scotty order the U.S.S. Enterprise to self-destruct.