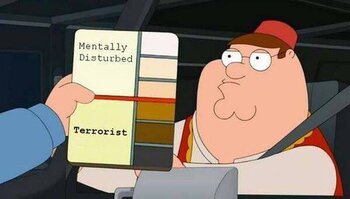 "Meanwhile, far away in another part of town
Rubin Carter and a couple of friends are drivin' around
Number one contender for the middleweight crown
Had no idea what kinda shit was about to go down
When a cop pulled him over to the side of the road
Just like the time before and the time before that
In Paterson that's just the way things go
If you're black you might as well not show up on the street
'Less you wanna draw the heat."
— Bob Dylan, "Hurricane"
Advertisement:

Here we're talking about instances of law enforcement determining that the likelihood of a suspect being guilty, or an individual being involved with a crime, is raised or lowered by their race or ethnicity.

You can't get through a cop show without running into profiling, it seems. It can make for a Very Special Episode or can be imbued into every element of a piece to shift down the Sliding Scale of Idealism Versus Cynicism. This trope is also often in play when someone is Mistaken for Terrorist, especially if the suspect is Muslim or assumed to be. Normally treated as definitely A Bad Thing, sometimes its appearance on the work is accompanied by a souring of the mood or a sudden change in view of a character, revealing the subtle bigotry underneath. Conversely, with the Noble Bigot with a Badge, it's actually a softer way of definitely showing that they are bigoted, without them doing something so terrible that we can't still view them as noble. Lately, there has been a trend of casting and costuming parts so that it invites the "profile" (gang member, perv, etc.), drawing the audience into profiling and then flipping it as a Red Herring.

A common, non-police variation is taxi cab drivers not picking up passengers of certain ethnicities.

Has nothing to do with The Profiler.