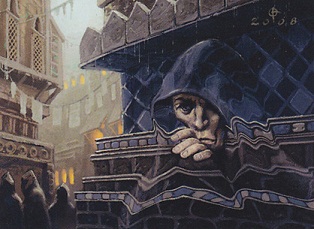 An invisibility cloak is a specific type of Applied Phlebotinum. It is worn on the body and renders the wearer invisible. It does not have to be an actual cloak and can be anything from a bodysuit to a ring. It can be magical, or it can be technological (in which case it may be referred to as a "cloaking device"), where the latter goes from a rather mundane suit whose colors change according to the environment, to a high-tech diffractive field that bends light.

A problem only occasionally brought up with these is that if the wearer's eyes are invisible, his retinas are also, and he should therefore be rendered blind. If it is a magical cloak, though, it can be explained away as being some kind of enchantment that lets you see.

When it is used in video games as active camouflage, you can sometimes see people cloaking this way as the light refracting around the character or monster's general shape.

also exist, while bigger stuff is in the concept stage. Except those are cloaking devices for vehicles, not personal invisibility devices.

Having said that, the Invisibility Cloak is a major tactical weapon in advanced societies that have abandoned radar-guided and heat-seeking weaponry, or at least when dealing with enemies who are using the Mark One Eyeball most of the time; for example, most soldiers only switch to thermal goggles in low-light conditions, making a device to turn invisible very useful for moving around unseen in the daytime.

Compare Invisibility, where this is an ability instead of an equipment or Invisibility Ink, which is far less permanent. Stealth in Space is this trope applied to spacecraft. Watch out for Invisibility Flicker, though.

The Cloak of Levitation seems to disagree.

The Cloak of Levitation seems to disagree.