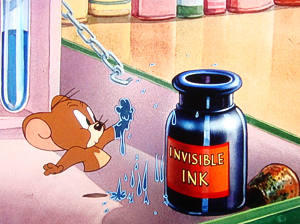 A substance that grants Invisibility when applied to something. Usually, it is invisible ink or vanishing cream, despite the fact these real-life items do not grant invisibility at all.

Alternatively, a character applies the substance on himself/herself yet remains visible, but thinks he/she is invisible.

Often washing the substance off will restore visibility.

See also Invisible Writing for the correct use of invisible ink. Compare and contrast Invisibility Cloak.