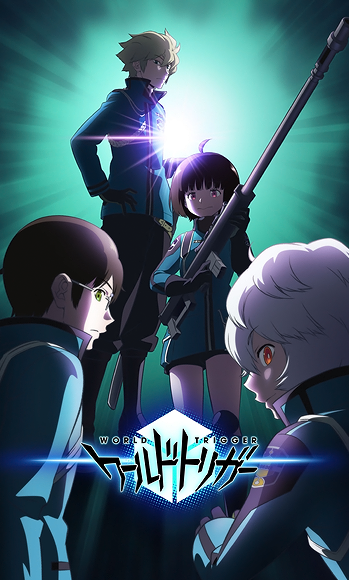 Face the difference to reach your Neighbors.
Advertisement:

In Japan, a gate to another dimension has opened, giving violent alien lifeforms known as Neighbors the opportunity to cross into our world and wreak havoc. To combat this new threat, the organization Border was founded. Their soldiers use highly advanced weapons known as Trigger to fight the Neighbors and preserve the peace. Enter New Transfer Student Yūma Kuga, who has only recently moved to Japan and is unfamiliar with the local customs.

Osamu Mikumo, one of Kuga's classmates and a bonafide overachiever, tries to keep the school's bullies off of Kuga's back and teach the transfer student how to blend in. Kuga and Mikumo are quickly caught up in a sudden Neighbor attack. While Mikumo reveals himself as one of Border's soldiers, he's quickly outmatched by this Neighbor, but Kuga also turns out to have connections to Border and a powerful Trigger. However, after the battle, Kuga explains that he is not a Border agent. He's a Neighbor who crossed over to earth illegally note There's nothing legally binding that prohibits Neighbor immigration, but the majority of Border doesn't like Neighbors in any shape or form.!

A shounen manga that began in 2013, written and drawn by Ashihara Daisuke. The series had a humble beginning but eventually became known for its highly tactical battles and its large cast. An anime adaptation by Toei Animation started in the Fall 2014 Anime season on TV Asahi, and ended in April 2016 when it almost Overtook the Manga. A second season ran from January 2021 to April 2021, with a third season announced for October 2021.

During 2016, the manga took frequent one-week breaks due to the author's poor health. In November, the manga went on an unexpected indefinite hiatus. Almost two years later, in mid October 2018, it was announced that the series would return for a five-chapter run, (enough to fill out the volume 19, along with four chapters left over from before the hiatus) starting on the 29th, and then continue publication in the monthly Jump Square magazine starting on December 4 (also the release date of volume 19).