The Door Slams You 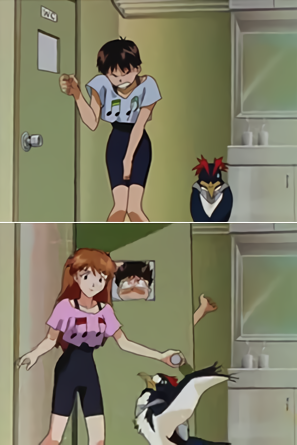 Shinji should've stepped back.
Flora: Uncle Greeny, where are you?
Greensleeves: I'm under the door, ya twits!
Rod Rescueman: That's a pretty stupid place to be when people are knocking doors down.
— Twice Upon a Time
Advertisement:

Alice is approaching a door, or is standing beside or in front of a door, when abruptly the door is thrown open from the other side by Bob. Alice is then revealed to have been squished against the wall by the door when it was smashed open.

While this is a type of Slapstick that is very common in animation, being hit by a door happens in live-action media also (not to mention real life). Definitely a case of Truth in Television: if you've ever seen a sign on a door warning you to open it slowly, chances are that sign was put up after someone got clobbered by that particular door.

There's also a second variant, where someone is rushing at an open doorway for whatever reasons he or she may have... only to have someone else close the door. This trope applies when the runner ends up splatted on the door; if they make it through, it's normally Impact Silhouette, and if the runner dives through a narrowing gap, you have an Indy Hat Roll variant.

Compare with Door Judo and Door Fu. Sister trope to Tae Kwon Door — for when this is weaponized during a fight. See also Toyota Tripwire for the car variant. Might be the deed of a Ghost Butler, or a side effect of Tactical Door Use. Can also overlap with Face Plant. Not to Be Confused with Heel–Face Door-Slam, although one might slam a reformed villain to death with a literal door. Also, not exclusively happening in Soviet Russia.