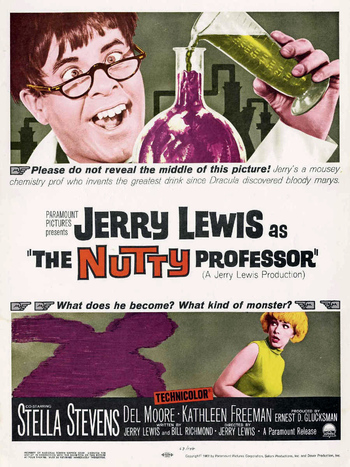 The Nutty Professor is a 1963 comedy film written by, directed by, and starring Jerry Lewis.

A twist on the story of Dr. Jekyll and Mr. Hyde, Lewis is Julius Kelp, an Absent-Minded Professor who — after being bullied and taunted — invents a serum that turns him into an incredibly handsome, strong, confident, and popular man named Buddy Love. His new personality gives him the confidence to pursue one of his students, Stella Purdy (Stella Stevens), but things go awry when Buddy begins to take over completely.

Remade in 1996 with Eddie Murphy in the lead role. An animated sequel was released in 2008, starring Drake Bell as the grandson of Julius Kelp, Harold Kelp.

The Nutty Professor provide examples of: