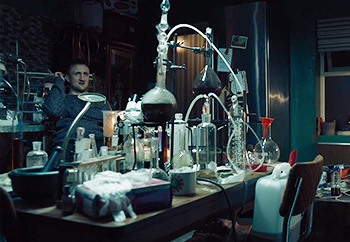 "What manner of mad scientist neglects his flasks of colored liquid? Next you'll question the Van de Graaff generator

in the middle of the room — and where will that leave us?"
— Professor Lupin Madblood, Narbonic
Advertisement:

What's the best way to visually demonstrate that a character is a scientist, mad or otherwise? Why, with tons and tons of flasks and beakers, of course! These are usually crammed everywhere conceivable in the scientist's laboratory, connected with spiraling glass tubing and usually filled with bubbling colored liquids, even if an experiment isn't actually in progress, and typically it's just there to be set dressing. Often, it's there to be dramatically smashed during a fight scene, an experiment gone wrong, or during the Mad Scientist's transformation. Bonus points if the scientist has no need of such chemistry equipment (such as being a physicist or anthropologist for example), and never actually does anything with it. Also, bonus points apply if you do see it in use, but incorrectly. Oftentimes you see Erlenmeyer or volumetric flasks put over a burner in a distillation setup, which is not done (that's what round-bottomed flasks are for, since this shape heats up more evenly, so it's less likely to crack from uneven distribution of heat).

Many of these overly complicated glassware apparatuses, particularly the tall ones suspended by cris-cross networks of ringstands and clamps, seem to be based on all of the photos that have been taken of the classic 1952 experiment by Stanley Miller and Harold Urey. However, the overall setup of the apparatus can be explained in simple terms that do make logical sense.

Dedicated lab glassware was invented mostly in the mid to late 19th century. Prior to that, distilling vessels such as alembics do date back centuries, but they were made completely of metal and scientists actually used very little glassware, glass-working still being a rare craft reserved for artisans. And until the invention of borosilicate glass in the 1880s (we know it under brand names such as Pyrex), lab glassware, when made of non metallic material such as glass or even earthenware was unreliable due to breaking or cracking when heated. The ubiquitous Erlenmeyer flask wasn't invented until 1860. The retort flask, another ubiquitous and recognizable vessel, was around since the days of alchemy but was originally made of metal. It was actually considered outdated by the time the Liebig condenser was invented in the late 1800s. Despite these facts, chemistry glassware frequently shows up in settings that predate their invention or futuristic settings where they should probably be considered impractical and primitive. Retort, round bottom, Florence, volumetric, Pasteur, and Erlenmeyer flasks may thus easily show up in a medieval wizard or alchemist's workshop or in a scientist's lab in a far future Space Opera.

A Sub-Trope of Cow Tools. They're almost required to show up in a Mad Scientist Laboratory. Interestingly enough, despite Pop Culture Osmosis, they would not have been part of the scene dressing in the original literary version of the Ur Example as the book also predates the availability of most of these items.note The book was written in 1818 but the setting, according to the narrative was sometime in the 1700s. Either way, the predating is true.

Jack Skellington thinks that science might be the answer to understanding Christmas.

Jack Skellington thinks that science might be the answer to understanding Christmas.