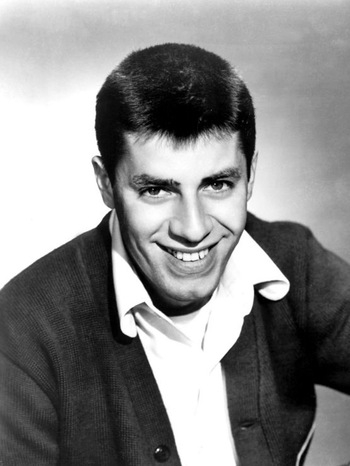 Jerry Lewis (born Joseph Levitch; March 16, 1926 – August 20, 2017) was an American comedian, actor, and filmmaker, noted for his wacky style of comedy and, later on, for his long-running annual Labor Day telethons for the Muscular Dystrophy Association. He's also the Trope Maker for a lot of things.

While his career stretched across more than seven decades, Lewis is generally considered to have been at his peak in the 1950s (when he worked with Dean Martin as one half of Martin and Lewis) and the early '60s.

Lewis wielded a considerable amount of control over his projects at the height of his solo career, and he became respected as an auteur who wrote, directed, and starred in his own material to keep true to his own vision. As an extension of this, he pioneered the use of video assist on film sets, because he needed to review his performances immediately rather than wait for dailies to be developed and screened the next day.

Not to be mistaken for Jerry Lee Lewis, though he did make some recordings as a singer (including a pair of non-comedic albums of pop standards), and his son Gary enjoyed success in the music world as frontman for the '60s pop/rock group Gary Lewis & the Playboys.

And no, he was never Vice-President of the United States.