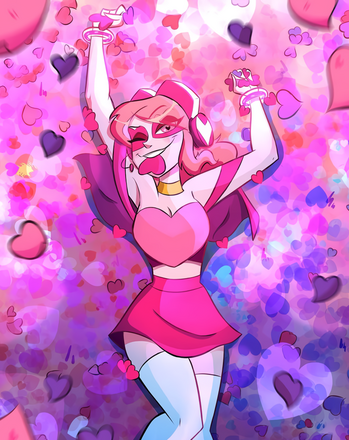 "Pink like the inside of your, baby
Pink behind all of the doors, crazy
Pink like the tongue that goes down, maybe
Pink like the paradise found
Pink when you're blushing inside, baby"
— Janelle Monáe, "Pynk (ft. Grimes)"
Advertisement:

In colour theory, the color pink is primarily associated with femininity, love, and romance but a lesser-known trait about pink is that it has a popular usage in eroticism and sensuality.

This trope is about the color pink being used to highlight sexual experiences or to symbolize the perversion or sensuality of a character. Whether the characters involved are chivalrous, abhorrent, romantic, or something to that degree. While it can be associated with men, pink is traditionally seen as a feminine color and so it's more likely for women to be associated with the color when they have sexual experiences or when they talk about their sexual histories.

Pink is often used to symbolize feelings of arousal and lust in characters, allowing the use of creative storytelling and imagery. Pink can emphasise the intended tone; a couple having a passionate dance or a dancer performing a pelvic thrust comes across as blatant mating dances or it presents a visual innuendo when they are performed under pink lights.

In stories, this trope can be also downplayed to represent feelings of affection, love, and intimacy. This color can be used to symbolize a crush, often through heart symbols and bubbles. In Japanese media, pink Cherry Blossoms are used as a motif for love. When a character falls in love, expect their eyes to be replaced with pink or red heart symbols or expect their eye color to change to pink. They can even show a Luminescent Blush or a Crush Blush as they sing and they dance under pink lights.

. Pink is a lighter shade of red but it's more associated with femininity, whereas red is associated with masculinity. In terms of symbolism, red usually represents action, aggression, and passion, while pink represents affection, charm, and tenderness.

Pink is often used as a pre-coital or post-coital indicator of sex but the usage of pink can generate a lot of Freudian imagery, allegories, and symbolism; a man using a giant pink weapon shows he is very insecure about himself and that he wants to compensate for something, a person who uses pink substances to control their target is akin to someone who uses aphrodisiacs, and pink monsters can symbolize the consequences of unprotected sex.

A Sub-Trope of Pink Means Feminine, as for some eroticism and femininity are inexorably linked. Also, compare Lady in Red and Black Bra and Panties for other color indicators of sexuality. It can overlap with Psycho Pink if it deals with sexual depravity. Compare Playboy Bunny for when a character wears a pink variant of the outfit for sex appeal.

Contrast Pink Heroine and Princesses Prefer Pink for uses of pink that are (usually) non-sexual and found in kids' media. See also Rose-Haired Sweetie and Cheery Pink for other uses of pink symbolism that may or may not overlap. Real Men Wear Pink can come into play if a man is a playboy and is highly skilled in seduction. Averted with Pink Is for Sissies since this is when the color pink is seen as an unpopular, unmanly color.