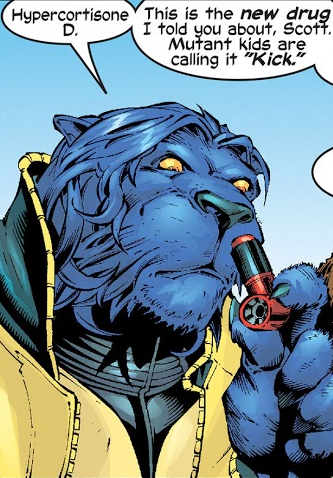 Caution: may cause nausea, car crashes and feeling three feet thick.
"People dance all day long if they take the stuff? What a weird drug."
— Shunsaku Ban, Astro Boy
Advertisement:

If you need an addictive or psychedelic substance for a storyline, there's always one old standby: make one up. This meshes perfectly with Speculative Fiction, but would seem completely out of place in a realistic series. After all, the planet "Yalic 4" might not have the same plants or minerals etc. that a fictional analogue of Earth would. Alternatively, if it's a comedy, you could get away with I Can't Believe It's Not Heroin! instead. Otherwise you can resort to the potentially narmy G-Rated Drug.

Aside from a writer's hesitancy to show a beloved character using drugs, Media Watchdogs often cracked down on any depiction of drugs (even if they were negative) for many years. Lately it's been reduced to "heavily sanctioned" at best, creating the unfortunate irony that incorrect portrayal of the effect of drugs has made audiences more liable to dismiss the true effects of drugs as propaganda.

In Real Life, these are known as "designer drugs", for people who want to get high without using technically illegal street drugs.

Often can be the Spice of Life. Compare Super Serum, Undiscriminating Addict. Not to be confused (usually) with Psycho Serum. Addictive Magic is closely related, as is A.I. Getting High. Compare Alien Catnip when a mundane substance proves a drug to aliens.

"I can feel Miss Pauling coursing through my veins."

"I can feel Miss Pauling coursing through my veins."