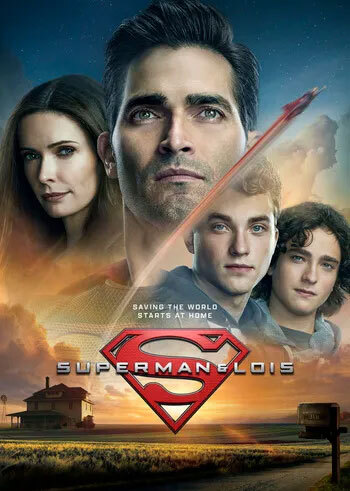 Superman & Lois is a superhero series on The CW, based on the DC Comics characters of the same names. It is the ninth live-action installment of the Arrowverse, and a spinoff of Supergirl.

Meanwhile, the Kent boys befriend Lana's eldest daughter, Sarah (Inde Navarrette), learn about their father's true identity, and experience an incident revealing that Jordan has inherited his father's powers. Eventually, Clark and Lois decide to settle in Smallville to give Jordan privacy while figuring out how to keep the family farm from closing, what Edge is planning for the town, and stop The Stranger.

Not to be confused with the 90s series Lois & Clark, following the same characters but in a different continuity and at a different stage in their relationship.

"No one ever dreams about the problems, but every life has them. Even the extraordinary ones."
Feedback