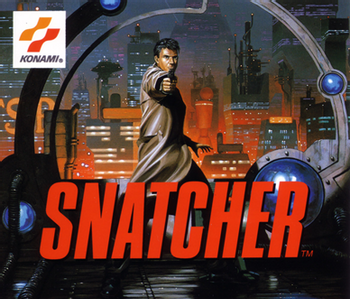 All controversy begins with DOUBT.
This story is dedicated to all those cyberpunks who fight against injustice and corruption every day of their lives.
Advertisement:

On June 6, 1996,note 1991 in the original Japanese version a massive explosion takes place at a government research lab near Moscow. The accident causes a deadly artificial virus (known as Lucifer-Alpha) to be released into the atmosphere, resulting in the infection and subsequent death of 80% of those living in Eastern Europe and Asia––half of the world's population. This tragedy––the greatest loss of human life in history––is retroactively named "The Catastrophe."

Fifty years later, sophisticated bioroid robots, colloquially known as "Snatchers," begin appearing in the artificial island city of Neo Kobe off the Japanese coast. One by one, these beings start killing off the city's population, and with the help of their advanced artificial skin, are able to seamlessly replace their victims in society at large. Nobody knows exactly where Snatchers come from or what they ultimately seek to accomplish. However, a man named Gillian Seed, who is an amnesiac discovered in Siberia by the Russian military three years before the story begins, is convinced that his past is somehow linked to the Snatchers. With his marriage in crisis and his memories all but vanished, Gillian arrives in Neo Kobe City in December 2047note née 2042 to put a stop to the Snatcher menace, learn the truth behind their invasion, and hopefully, uncover his own past as well.

Snatcher is a groundbreaking visual novel written and directed by Hideo Kojima early in his career, set in a Cyberpunk universe (with clear Blade Runner overtones), and with all of the quirkiness Kojima eventually became known for. It includes more than a couple Shout-Outs to other Konami games and the Metal Gear series. The game was first released in Japan for the PC-88 and MSX2 computer platforms in 1988. These first two releases ended the story on a Sequel Hook at the end of Act 2, but no sequel was actually made. Instead, Konami remade the game as an RPG for the MSX2 titled SD Snatcher in 1990, which depicted the characters in a chibi art-style, but also concluded the story in its own manner. Kojima would later revisit the original Snatcher in 1992, with a remake for the PC Engine Super CD-ROM2 add-on titled Snatcher CD-ROMantic. This version updated the graphics to 16-bit standards, and added CD-quality music and voice acting to certain scenes. It also finally concluded the story with the added Act 3, which drew some of its plot elements from SD Snatcher's extended ending.

Konami decided to localize Snatcher to English with a Sega CD port released exclusively in North America and Europe in 1994, although Kojima was not involved with this version (having moved on from Snatcher by this point to work on his next project). Because of its late release during the Sega CD's lifespan, only 25,000 copies were manufactured. Original copies are now collector's items, both because of the aforementioned small print run, and also as a result of being the only official English localization of the game. Snatcher would receive another set of re-releases in 1996 for the newly-released 32-bit consoles, the PlayStation and the Sega Saturn, with these versions once again being specific to Japan.

A Spiritual Successor titled Policenauts was released for various platforms. The Snatchers also make an appearance in the "Jamais Vu" mission of Metal Gear Solid V: Ground Zeroes, in which they're fought by a certain cyborg ninja. A trailer for the mission can be found here.

"Throughout history, suspicion has always bred conflict. The real conflict, though, resides in people's hearts. This conflict has just begun."