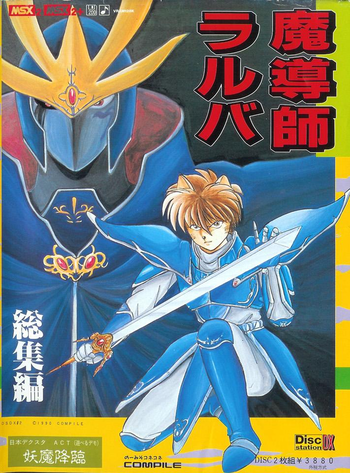 Madoushi Lulba is a fantasy adventure game for the MSX created by Compile. It was first released on their Disc Station disk magazine episodically (appearing on issues #1, #2, and #4), before being bundled together in Disc Station Deluxe 2, along with an extra chapter and updated graphics and sound.

The story of the game involves the resurrection of the titular Lulba, an ancient dark wizard who plans to throw the world into darkness, using his army of 240 million monsters to aid him. The only one who can stop him is Cyber Cat, a traveling feline warrior who is on his way back to his hometown, and comes into possession of the Sword of Light after running into the eccentric but well-dressed Haagen Duck, who decides to become the young swordsman’s apprentice. The game details their journey through a world of incredibly cute and diverse animals, and the strange situations the duo find themselves in.

Gameplay is typical for adventure games of the era; you have a list of commands on the right of the screen, a visual window to the left, and a text box at the bottom. The player can interact with characters or go places by selecting a command from the command list. One deviation that sticks out, however, is a life gauge at the very top right of the screen, which can be depleted by performing certain harmful actions or by enemy characters; these enemy characters show up at the end of each chapter, and cannot be defeated merely by your weapon. The player will have to work out a solution for each boss, and some bosses’ weaknesses are more obvious than others.

The game was a reasonable success for Compile, becoming a favorite among fans of the company and Japanese adventure gamers, and thematically paved the way for the Madou Monogatari series (which shares a similar light-hearted fantasy theme with cutesy characters). It also shares a few connections to that series, such as one of Lulba's minions, Owlbear, becoming a recurring character in both Madou Monogatari and Puyo Puyo, and several characters showing up as NPCs and enemies in Madou Monogatari ARS. While the game hasn't seen any sequels, it hasn't been forgotten; D4 Enterprise, who currently own the rights to the game, have put Madoushi Lulba up for sale on Project EGG

, and Owlbear has continued to appear in Puyo Puyo games up to the present day.