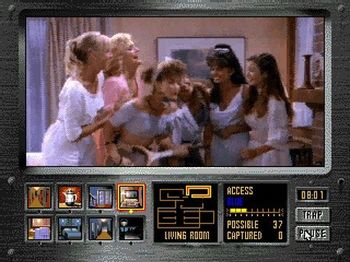 Hey, this game has really realistic graphics!
Too bad the acting isn't of similar quality.
"CD-ROMs were a major technological leap back in the early nineties. All of a sudden our portable storage capacity jumped from the three-and-a-half megabyte floppies we were using to over seven hundred megabytes crammed on this little disk, and it didn't take long for game designers to stop and think: Hey, these things are like little Laserdiscs, we could put movies and stuff on 'em! And we could make kickass games out of that!"
— Noah "The Spoony One" Antwiler, The Spoony Experiment, on the origin of Full Motion Video games
Advertisement:

A "full motion video" ("FMV" for short) is a video game term, used back in The '90s for cutscenes which use pre-rendered or live-action video, as opposed to playing in-engine.

Today, however, the term is mainly associated with a particular type of video game which are entirely based around video clips. Gameplay consists mostly of pressing buttons at the right time, choosing the correct sequences of clips, or playing other games that just use the video as a backdrop.

Nowadays, FMV games have a poor reputation, and it isn't hard to see why. Beyond the minimal amount of actual gameplay, during the height of the genre, most of them were badly written and poorly acted - the task of programming a whole new genre of a game had to be balanced with hiring scriptwriters and actors. Naturally, quality suffered and audiences were treated to camp movies, hammy actors, cliché plots, or just a lousy game.

In arcades, the genre really began in 1983 with the release of Dragon's Lair, a laserdisc-based game with animation by Don Bluth. The games typically cost twice as much to play as any other game, and gameplay consisted of pressing a button or direction at the appropriate point, but it was very popular and inspired countless imitators. The fad died after a year or so because of the sameness of the gameplay and the difficulty in maintaining expensive laserdisc players. Plus, laserdisc games were prone to skipping and even suffering outright malfunctions, due to factors such as the disc or reader wearing out after extensive play. Regardless, arcade laserdisc games were sporadically produced even through the 1990s. There were also attempts to bring laserdisc games into the home in the 1980s with the Palcom PX-7 MSX computer and the incredibly obscure RDI Halcyon

console, and in the 1990s with the Pioneer LaserActive. Many old laserdisc games were simple enough that they can be played nowadays on an ordinary DVD player.

Full motion video games really became common on home computers with the introduction of CD-ROM drives in The '90s, and CD-equipped console systems like the Sega CD, 3DO Interactive Multiplayer, and Philips CD-i rushed to exploit the trend. Gameplay on home systems was no better than in the arcade however, with the extra problem that early CD-based home systems, especially the Sega CD, weren't powerful enough to produce good quality video.

Not every FMV game was bad, of course. Some, especially the Tex Murphy series, are considered classics of the adventure genre. But these are generally the exception, and for every Tex Murphy, Phantasmagoria, or Gabriel Knight, there were ten Double Switch or Johnny Mnemonic-level games. At $60 a pop, the consumer soon decided they'd get more entertainment from either watching a real movie or playing a real video game.

Thus, FMV has never really caught on, even with better quality and capacity as Technology Marches On. Of course, many people still enjoy the lesser-quality games for the camp value. The video game industry moved on to other ways of putting graphics over gameplay.

Though the genre is nowhere near as common as it once was, it did see something of a resurgence in The New '10s, with several new titles such as Her Story, Erica, and even a new Tex Murphy game (Tesla Effect). New entries in the genre continue to be released to this day.