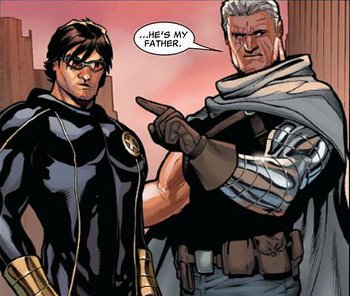 It's a long story, okay?Short version Basically, Cyclops sent his infant son into the distant future to save his life, and the baby grew up, became Cable, and time-traveled back to the present.
Advertisement:

Due to Time Travel, Immortality, magic aging (or de-aging), a child looks significantly older than their biological parent, or at least far too old to be their child. This can occur on either side of the relationship; maybe it's a Kid from the Future, come to warn their parents about some apocalypse before they're even born. Or maybe the parent is The Ageless, and still looks twenty despite having a child thirty years ago.

See also Absurdly Youthful Mother and the other subtropes, as well as Living Distant Ancestor. May lead to Outliving One's Offspring.