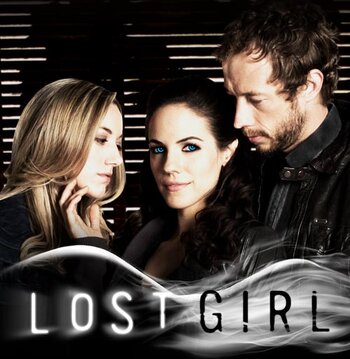 Life is hard when you don't know who you are.
It's harder when you don't know what you are.
My love carries a death sentence.
And I was lost for years; searching while hiding… only to find I belonged to a world hidden from humans.
I won't hide anymore.
I will live the life I choose.
—Bo, from the title sequence
Advertisement:

Lost Girl is a TV series produced for Canada's Showcase Television and aired on Syfy. It revolves around Bo (Anna Silk), a young woman with the ability to control men and women through her touch and suck the life from them with a kiss. She is a succubus, and one of the Fae, a group made up of several races of supernatural entities separated into two sides: Light and Dark. Rather than choosing a side, Bo decides to strike out on her own and learn about her past with the help of a streetwise sidekick named Kenzi (Ksenia Solo), a Fae police detective named Dyson (Kris Holden-Ried) and his sidekick Hale, a beautiful scientist named Lauren (Zoie Palmer), and a wise old man named Trick (Rick Howland).

The show was aired on Syfy, with Funimation distributing the series on DVD and Blu-Ray in Fall 2012. It has a webisode series dubbed "Season 3.5."

Character specific tropes can be found on the character page. Now has a recap page too.

The webisodes provide examples of:

Example of:
Girls Behind Bars