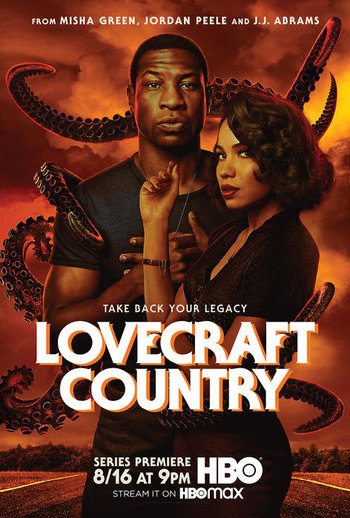 Take back your legacy.
Advertisement:

Lovecraft Country is a 2020 HBO American Drama/Horror series, based on the novel of the same name by Matt Ruff. Developed for TV by Misha Green, in collaboration with Warner Bros. Television, Monkeypaw Productions and Bad Robot Productions. It stars Jurnee Smollett, Jonathan Majors, Aunjanue Ellis, Courtney B. Vance, and Michael K. Williams.

The story follows Atticus "Tic" Freeman (Majors), a Korean War vet who helps his uncle George (Vance) with the Safe Negro Travel Guide. As Jim Crow laws are still prevalent in the South and much of America's police force is dominated by Caucasian people who are unsympathetic to the plight of African-Americans at best, the guide is a literal lifesaver for African Americans who want to travel around the country.

After completing a trip, his uncle gives Tic a letter from his father Montrose (Williams) asking him to come to a town in Massachusetts in order to look into his family history. As they embark on a road trip through the horrors of the 1950s Jim Crow America, joined by Tic's childhood friend Letitia "Leti" Lewis (Smollett), the group soon discovers that racists who can murder African Americans with impunity are not the only horrific monsters roving around America. Soon Tic and the rest of his family become entangled with eldritch creatures, ghosts, white supremacist sorcerers, and other horrors that are connected to his heritage, and want him for their schemes.

Has a characters page that is under construction. In June 2021, it was announced the series would not receive a second season.