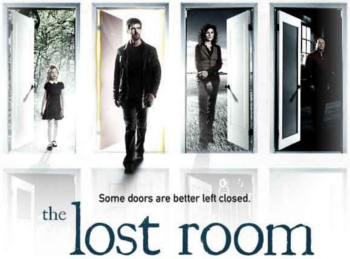 The Lost Room is a miniseries that aired on Syfy in late 2006.
Advertisement:

Detective Joe Miller (Peter Krause) is your standard police detective, recently divorced, fighting to keep custody of his daughter Anna (Elle Fanning), and currently working the case of two lightly-singed men being embedded into the walls of an antique store. Said men were fighting with a group of armed thugs over a motel room key that can open a door to anywhere as long as you're willing to walk through the same motel room every time. This is, obviously, a key people are willing to spend millions of dollars on and take countless lives for. Soon, Miller learns of the Objects, a collective of over a hundred other artifacts, each with their own powers (some very strong like the Key and some complete duds like the Bus Ticket that dumps you onto a highway outside of Gallup, New Mexico), all originating from that motel room, and all being vied over by separate groups.