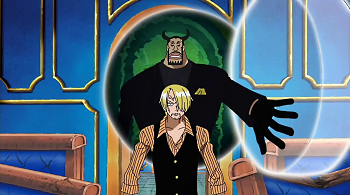 Essentially, the ability to open and close doors. Ooooh, scary. But picture this. The user in question seals you inside a door to another dimension for centuries, or perhaps opens a door to the infernal planes and fishes out a few monsters. Still think so?

Open and Shut is one of the lesser known Stock Superpower, and a type of Yin Yang Magic.

This power is commonly tied to a Cool Key. Thus, the favored weapon of this user is usually a giant vaguely (or not so vaguely) key-shaped staff. It is favored by exorcists since it is a quick way to deal with fearsome creatures without converting to the religion. All you need is to find a handy door to lock all your worst nightmares away behind. Just better hope they don't decide to team up to rush the door.

In its most basic form, this is basically a combination of Barrier Warrior and Thinking Up Portals. That is, you can open/close doors to anywhere (and open any doors), or send incoming attacks into another place. But this is very much a Semantic Superpower (in fact, the ability to open doors is currently the quote for the page), so other applications of this power can be made.

Because you can open any door, there might be some overlap with the various Elemental Powers. Most obviously is Space/Time in the form of dimensional travel, but you could conceivably use fire magic by opening a tiny hole into a volcano or something, or water by opening a hole into the middle of an ocean. If the definition of this power is vague enough, this becomes a Swiss-Army Superpower.

Not to be confused with an Open-and-Shut Case.

See also Thinking Up Portals, for a practical usage. Contrast Master of Unlocking which is about people with mundane, lock-picking abilities, rather than a superpower.