Film / It's a Wonderful Life 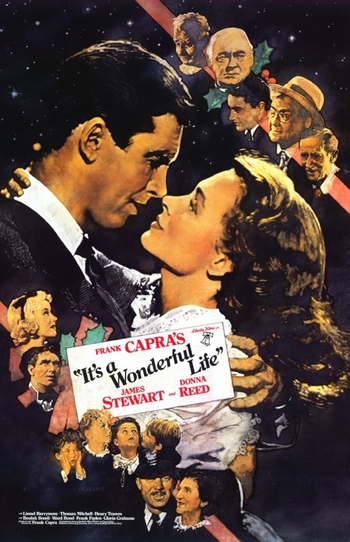 "No man is a failure who has friends."
"Every time you hear a bell ring, it means that some angel's just got his wings."
Advertisement:

The Trope Namer for It's a Wonderful Plot, and an annual staple of Christmastime viewing, this much-beloved 1946 Frank Capra film tells of one man's life of self-sacrifice and quiet despair, from which he is rescued by a miracle.

As the film begins, it's Christmas Eve 1945, and two angels are listening to myriad prayers from various residents of the small town of Bedford Falls, New York, all requesting help for a certain George Bailey. Summoning a third angel, called Clarence Oddbody, they tell him he must answer the prayers, but only after he's been told who George is. Cue Flashback.

Zooming in on Bedford Falls in 1919, the first thing we see 12-year-old George do is rescue his younger brother Harry from drowning in a frozen pond, at the cost of permanent deafness in one ear. A little while later, a girl named Mary Hatch whispers promises of eternal love into that deaf ear shortly before George saves another life, and a pharmacist's career.

Skipping ahead a few years, we see the now-grown George (Jimmy Stewart) attending Harry's high school graduation dance, held in the school's gymnasium/swimming pool. There, George tells Mary (Donna Reed) about his plans for the future: leave town, see the world, go to college, build big things. But before an hour has gone, George learns his father has had a fatal stroke. His dreams will have to be deferred.

George stays in Bedford Falls to help his absentminded Uncle Billy (Thomas Mitchell) look after the family business, the Bailey Bros. Building and Loan Association, on the understanding that Harry will take over when he returns from college. However, Harry brings back a wife, whose father offers him a much better job, which George insists Harry take, sacrificing his opportunity. Soon afterward, George himself is offered a better job, but turns it down, knowing that without him the family business will be taken over by the avaricious banker, Mr. Henry Potter (Lionel Barrymore). He is further tied to Bedford Falls when he and Mary get married, are forced to use their honeymoon nest egg to keep the Building and Loan afloat after a run on the bank, and eventually have four kids together.

For several years, George's life continues in this vein. Every golden opportunity is frustrated by his self-imposed duties, until one Christmas Eve, when Potter seizes an opportunity, thanks to George's hapless uncle, to steal $8,000 from the Building and Loan, then threatens to charge George with the theft. This latest indignity, on top of his daily troubles, drives George first to verbally abuse his family, to get drunk, and then to attempt suicide, after realizing his life insurance would be able to cover all his debts and then some.

This is where the film began. Clarence (Henry Travers) appears, prevents George from committing suicide, and then grants his unintentional wish, creating an Alternate Universe in which George never existed.

Wandering around town, George soon discovers that Pottersville, the alternate Bedford Falls, is teeming with seedy bars, nightclubs, burlesque houses, pool halls, gambling dens, and pawn shops. All of his friends and acquaintances are miserable, his brother is dead (as are a number of soldiers whose lives Harry saved in World War II), his mother runs a dilapidated boarding house, his uncle has been institutionalized since the failure of the Building and Loan, and his wife is a spinster librarian. Clarence then explains how George single-handedly prevented this dire fate. He, and he alone, kept Potter in check, preventing the town from descending into squalor, crime, and vice.

George takes back his wish and Bedford Falls is restored. When he returns home, the sheriff is there with a warrant for his arrest, but all the neighbors rush in, offering money. Mary had started making telephone calls immediately after George left the house, finding out the truth and spreading the word. George has been saved. His life may never improve, but he now knows that he is appreciated, and has made a difference.

Adapted by Capra and screenwriters Frances Goodrich, Albert Hackett, and Jo Swerlingnote with uncredited contributions from Michael Wilson and Dorothy Parker from Philip Van Doren Stern's 1943 short story "The Greatest Gift", It's a Wonderful Life was a box-office disappointment on its initial releasenote The general consensus is that it was a little too thematically dark and heavy for an immediate postwar audience looking for lighthearted escapism, and being a Christmas movie that opened in early summer probably didn't help either. but enjoyed a popular resurgence in the US beginning in the 1970s, when it was discovered that a clerical error had prevented its copyright from being renewed, which meant the film was now in the Public Domain and any television station could legally show it as often as they wanted without paying for a license. Many PBS stations across the country would run it during pledge week, and around Christmas time, you could routinely find as many as five or six stations in an area all carrying the movie at some time of the day or evening. It was also issued on VHS, in varying levels of quality, by numerous companies large and small. This practice ended when Republic Pictures, the successor to the film's original rights holder, realized that while they couldn't claim copyright over the film itself, they could claim the rights to the original story and music... and they promptly did so. Republic then announced to television stations that from that point forward they would enforce the copyright on the music and story, meaning you'd now need a license to broadcast the movie. NBC has had exclusive network TV rights since 1994, and usually airs it twice annually, once early in December and again on Christmas Eve; since 2014, cable channels owned by NBCUniversal, such as USA Network and Bravo, have given the movie a few additional showings each year, and its E! network started running an all-day Christmas marathon of the film beginning in 2020. Similarly, Paramount (whose parent company, Viacom, now known as Paramount Global, acquired Republic in the late '90s) currently holds exclusive home video rights for the film (all other films Paramount owns through Melange Pictures are distributed on home video by Olive Films), while Prime Video gained online streaming rights in 2018.

Just say the word, Mary, and I'll lasso you some Tropes: