Film / Woman of the Year 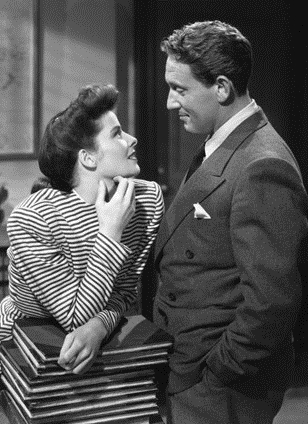 A 1942 Romantic Comedy / Dramedy movie directed by George Stevens, notable in part for being the first onscreen pairing of Katharine Hepburn and Spencer Tracy. It won an Academy Award for screenwriters Michael Kanin and Ring Lardner, Jr.; in addition, Hepburn was nominated for Best Actress.

Sam Craig (Tracy) and Tess Harding (Hepburn) both write for the same newspaper, the fictional New York Chronicle—he as a sportswriter, she as a high-powered political analyst. A feud in their columns erupts over baseball, leading their editor (Reginald Owen) to summon them to his office and order them to stop their intramural squabbling. Sam is immediately impressed when he catches the attractive Tess adjusting her stockings, and she is equally attracted to him. He invites her to go to a baseball game with him, and they have a wonderful time.

Despite the wide differences in their lives and personalities, Sam and Tess fall in love and decide to marry. After a hurried wedding squeezed into Tess's hectic schedule, Sam moves into her apartment. Over the next few months, they have several minor disagreements about not being together enough, but they are still very much in love.

A bigger problem occurs when Tess volunteers to take on the care of Chris, a Greek refugee child, without consulting Sam. Though Sam likes the boy, he is angry and criticizes Tess for not giving even "ten percent" of her heart to matters at home. Their argument is interrupted by the news that she has just been named "America's Outstanding Woman of the Year." On the night of the banquet, Sam realizes that Chris is very lonely and misses his friends at the refugee home. When Tess off-handedly tells Sam that the child will be alone during the banquet, they have a bitter argument, and Sam stays home. While Tess is at her ceremony, Sam returns Chris to the refugee home and walks out on Tess.

The next day, Tess attends the wedding of her widowed father and her maternal aunt, who was also her feminist mentor. While listening to the wedding vows, Tess is deeply moved and realizes that she has neglected Sam. She finds the apartment he has rented, bluffs her way inside, and tries to cook breakfast for him. She proclaims her intention of being nothing more than his wife and thinking only of his domestic needs, but he believes it is an insincere tactic to win him back. Her effort ends in Epic Fail when the coffeepot and waffle iron both overflow, and she breaks down. Sam tells her this is the first time he has ever been disappointed in her, chiding her for going to extremes. He says he does not want Tess Harding (the busy single woman with no time for him) or "just Mrs. Craig," but instead "Tess Harding Craig." Tess happily agrees, and they reconcile.

A musical Screen-to-Stage Adaptation with a score by Kander and Ebb, starring Lauren Bacall as Tess, opened on Broadway in 1981.

Woman of the Year provides examples of the following tropes: