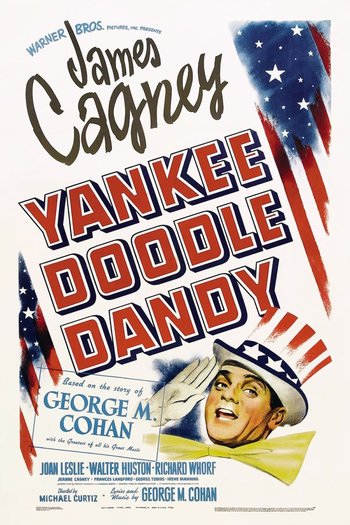 Yankee Doodle Dandy is a 1942 Musical Biopic film directed by Michael Curtiz, starring James Cagney and Walter Huston. It tells the life story of Broadway song-and-dance man George M. Cohan, the composer of such classic songs as "Over There", "You're a Grand Old Flag", and "Give My Regards to Broadway". Cohan's life is depicted from his beginnings with his family's vaudeville act, to fame and fortune as a Broadway composer and American patriot.

The film actually starts after Cohan has come out of retirement to play President Roosevelt in his best friend's new musical I'd Rather Be Right. After the show, he's summoned to meet the real President. Cohan chats with Roosevelt, recalling his early days on the stage. The story then flashes back to his youth, starting with his birth.

The Four Cohans perform successfully. Later, in partnership with another struggling writer, Sam Harris, they finally interest a producer and they are on the road to success. George also marries Mary, a young singer and dancer. As his star ascends, he persuades his now-struggling parents to join his act, eventually vesting some of his valuable theatrical properties in their name.

A critical and commercial triumph, Yankee Doodle Dandy won three Academy Awards, including Best Actor for Cagney. It was inducted into the National Film Registry in 1993. The most famous scene in the movie, Cagney's tap dance down a White House staircase, was done without any rehearsal.

Cagney would briefly reprise the Cohan role for a cameo in the 1955 film The Seven Little Foys, in which he performs a tabletop challenge dance with Bob Hope as Cohan's friend and rival Eddie Foy.