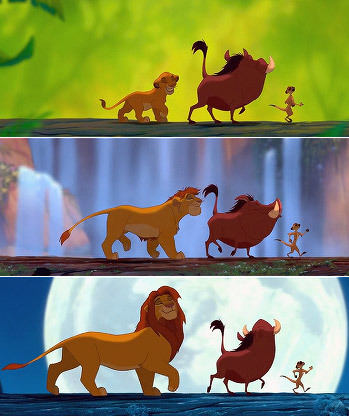 What happened in that span of time? Eh; hakuna matata.

A type of Match Cut, often a dissolve, that shows a character aging, sometimes from A Minor Kidroduction. Often, different actors are used for the young and old version of the character. By showing both in the same position and location, it is shown that it is the same person, only older.

One common version of this trope starts with a slow zoom in on a characters eyes, which then cuts to the older version and zooms out. Another is to dissolve from one version to another.

The same technique can be used to start a flashback, in which case the character gets younger. Sister Trope to Picture-Perfect Presentation. Compare Time Passes Montage.