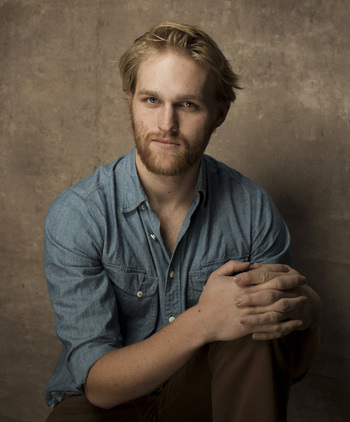 Do you know who he is?!
Advertisement:

Prior to launching his career in acting, Russell played ice hockey, most notably for the NCAA team of the University of Alabama in Huntsville note Not the University of Alabama; that would be the system's main campus in Tuscaloosa. but he sustained injuries that forced him to retire from the sport permanently. Some of his acting roles have incorporated his hockey history into them, most notably in 2017's Goon: Last of the Enforcers.

Since pivoting to Hollywood, some of Russell's most well-known projects include an episode of Netflix's Black Mirror ("Playtest"), Richard Linklater's 2016 film Everybody Wants Some!!, the 2018 World War II horror film Overlord, and the 2021 Marvel Cinematic Universe miniseries The Falcon and the Winter Soldier.

Russell is something of Hollywood royalty; his parents are Kurt Russell and Goldie Hawn, while his half-siblings are Oliver and Kate Hudson. His paternal grandfather, Bing Russell, was also a well-known actor.