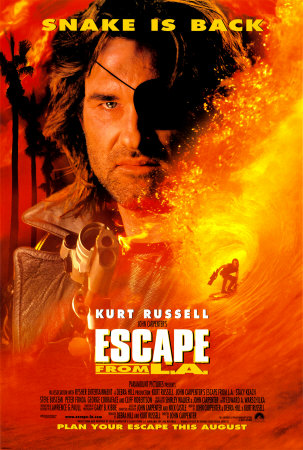 President: If you go to Los Angeles, and come back with that black box and put it in my hand, you'll be given a full pardon for every moral crime you've committed in the United States.
Snake Plissken: Sounds familiar.
Advertisement:

Escape from L.A. is the 1996 sequel to John Carpenter's Escape from New York.

In 2013, America has become even more dystopian than it was in the earlier film: A theocratic fundamentalist Christian President (Cliff Robertson) has taken over control of the country, and Los Angeles has become a penal colony/no man's land/landfill/roach motel after breaking off of the US thanks to The Big One. As the film begins, an airplane escape pod has crash-landed in Los Angeles; this pod carried the President's daughter, Utopia (A. J. Langer), who has since sided with Cuervo Jones and taken the United States' super weapon — a device that controls "The Sword of Damocles" satellite system, which would let the President hit any country in the world with an electromagnetic pulse — with her. Snake Plissken (Kurt Russell) is back as the President drafts Snake into entering Los Angeles, retrieving the device, and executing his daughter for treason. His reward for a successful mission will be a full pardon...as well as an antidote to a virus injected into him to ensure his compliance, of course.

Left with no options, Snake enters the fortified and barbwired city of Los Angeles; like New York before it, the city has become a prison with no guards and precious little order. As Plissken makes his way through ruins of what was once a vibrant and lively city, he both gains and loses allies and fights off loads of bad guys.