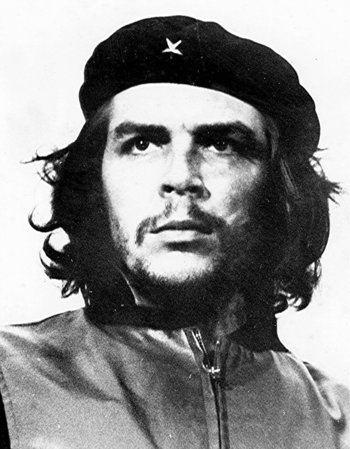 This face is one of the world's best selling t-shirts.
"It would take a thousand years and a million pages to write Che's biography."
—Gabriel García Márquez, Colombian journalist
Advertisement:

Ernesto Guevara (14 June 1928 – 9 October 1967), better known by his nickname "Che", note  An informal Argentinian interjection equivalent to "hey", used to call other's people attention. His Cuban friends heard him use it a lot and the name stuck. So "Che Guevara" is basically "Hey, Guevara". was an Argentinian Marxist revolutionary who attained fame for his active role as a guerrilla leader and strategist in the Cuban Revolution (in which he helped Fidel Castro to seize power from its dictator Fulgencio Batista) and then later, his death in Bolivia, where he was arrested and executed by the Bolivian military with the aid of the CIA. He also ran Castro's most infamous prison, La Cabaña, and oversaw Revolutionary Tribunals and summary executions, for which Cuban exiles would call him "El Carnicero de La Cabaña" (or "The Butcher of La Cabaña"). After that he worked as a government bureaucrat and took a lead in introducing literacy measures. Eventually he became restless and decided to engage in revolutionary causes again. He later took part in the Congo revolution, but it wasn't successful. Then he conducted a complicated scheme in Bolivia that eventually led to his capture and execution.

Defending a socialist cause and being executed at a young age, Che Guevara evolved into a symbol that represents both "civil disobedience" and "political awareness" (The Other Wiki has several

). A photograph of Che by Alberto Korda

note Did we say "several articles?" Make that a a whole category

. became one of the most famous photographs during The '60s, which thanks its subject's youth, good looks, and intense gaze, made him an Icon of Rebellion well into the 21st Century. More often than not, he is also used as the "Romantic Expression" of guerrilla warfare: a tough but well-intentioned guy, willing to fight injustice and American imperialism over everything. Che is often treated as a hero figure in many books, film, and TV shows alike, and he remains a popular icon in much of the Global South.

According to Guevara's detractors, these aforementioned portrayals also gloss over the fact that Guevara openly admitted to revolutionary violence (as means for establishing a firm government in times of war), including executing perceived traitors during the Cuban Revolution and famously admitting in his speech at the UN that his administration executed political prisoners who were integral to Batista's dictatorship. Supposedly, he even openly advocated for war with the United States during the Cuban Missile Crisis and after the US-backed invasion of Cuba

. According to other detractors, he also held a low opinion of the guerrillas he fought with in the Congo, which some argue was due to Che being racist, even though there's no clear evidence to support that theory, which blatantly ignores that Guevara's personal assistant/driver and friend was in fact a black man.

All of this being said, an oversimplified and arguably sanitized portrayal of Che Guevara is necessary for his commodification in the West into a mass-market consumerist image providing money that mostly goes to western capitalist nations, so it's unlikely to change as long as Che continues to be in demand.

Lots of books, quite a few movies, and even an SNK Ikari Warriors-ish videogame called "Guevara" (dolled up in the USA as Guerrilla War) have been done about him.