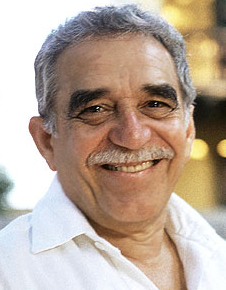 Gabriel José de la Concordia García Márquez (6 March 1927 – 17 April 2014). The name that is synonymous with Magic Realism. Born in Colombia in 1927, the man has been on the writing scene for a very long time and produced a solid body of work. In 1982, he gained the Nobel Prize in Literature. His book One Hundred Years of Solitude has become the definitive work of Magic Realism, not to mention his most famous book. It is now required reading in many schools in the Spanish-speaking world.

His grandmother was a great influence to his literary career. When he read The Metamorphosis by Franz Kafka, he pereceived it to be quite similar to the style of his grandmother.

His books deal with themes like solitude, eternal cycles, Banana Republics, political disputes and civil wars, themes present in his life and the life of his country with distressful frequence.

He has also immersed himself into the cinema, helping directors to turn some of his books into films.

Nowadays, García Márquez's fame has become a little awkward to Latin American writers, since it has generated the impression that all the literature of the zone is about angels, jungles and countryside. As a countermovement, the McOndo literary movement

has been created by writers trying to present a more actualized Latin America. He’s still respected by those writers as a good writer, however.

On the 7th of July, 2012, Márquez's brother revealed that he was suffering from senile dementia