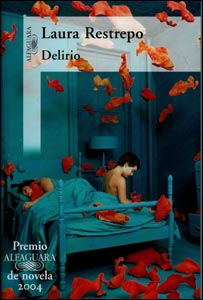 Believe me, it does make sense.
I knew that something irreparable happened at the moment that a man oppened the door in that hotel room and I saw my wife sitted at the back of it, looking through the window in a strange way.
—Laura Restrepo, first sentence of Delirio
Advertisement:

Delirio, or Delirium if you speak English, is a 2004 novel from the Colombian writer and journalist Laura Restrepo. Mainly about Agustina, her madness, and her common, high-standard, water-obsessed family. Also drugs, The Cartel of Medellin and sex. The structure is divided into 4 storylines that are told in fragments:

Not to be confused with the American Young Adult book series.

Contains example of the following tropes: