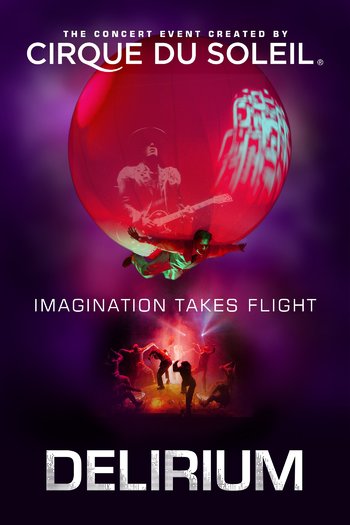 Cirque du Soleil's eighteenth show was billed as a "live music event" — perhaps the best way to sum up a 2006-08 arena concert tour of North America and Europe based around rewritten/rearranged versions of songs from the company's "typical" shows. It wasn't a Jukebox Musical, but included a typical Cirque plot and acrobatic feats. Most of the shows from Saltimbanco through Varekai were represented via songs.

The program summed up the plot thusly: "On a tightrope stretched between two worlds, a dreamer searches for his heartbeat." More specifically, said dreamer is Bill, a young man travelling by balloon to find his place in the world and purpose in life, encountering a few bizarre characters and a woman who might be his soulmate along the way.

A film compiled from the final performances was released by Sony Pictures as a limited engagement in North America in August 2008; it has not been released on DVD, but in 2013 was one of several Cirque programs made available as a video-on-demand title via digital cable providers.

Not to be confused with the novel of the same title by Laura Resrtrepo, or the young adult Delirium Series of books.