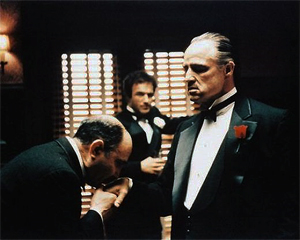 He'll make you An Offer You Can't Refuse.
"The underworld will now be run like a business... and the Chairman of the Board will be... the Kingpin!"
— The Kingpin, The Amazing Spider-Man #50
Advertisement:

This is The Patriarch of a crime family — most often The Mafia. He is shrewd, ruthless, and very dangerous to cross. Often he will hold to an arcane code of honor, which is perhaps incomprehensible to non-mobsters. He will be very protective of his family and he will ensure that his dear little girl wants for nothing, all while maintaining the illusion of morality. Unlike other villains, this type is often fairly Genre Savvy. Quite likely he did read the Evil Overlord List. After all, you don't rise to become the head of dozens if not hundreds of criminal individuals by being careless. The Don is also more likely than many villain archetypes to be an Anti-Villain, whose sole interest is in keeping the peace in his town and the money flowing while genuinely believing that his role is needed for maintaining order. A sure sign that he adheres to the idea that Even Evil Has Standards will be if he opposes the drug trade and fights the Ruthless Foreign Gangsters who try to introduce it on his turf. When a Villain Protagonist, the Don may be willing to use coercion, bribery, and murder to achieve his goals, but there will remain lines he won't cross; it is also all but guaranteed that while the Don's family and operatives may be criminals, their enemies will be even more reprehensible.

The Oyabun is the Don's Yakuza counterpart, while in The Triads and the Tongs, he's known as the Mountain Master or the Dragon's Head. The King of Thieves is an equivalent for more fantastical settings. The Consigliere is one of his key subordinates. In a more fantastic setting, the boss might be required to be a Super Mob Boss in order to keep up with other threats.

See The Queenpin for his Distaff Counterpart.

Big Boy makes a play to become the boss of bosses.

Big Boy makes a play to become the boss of bosses.