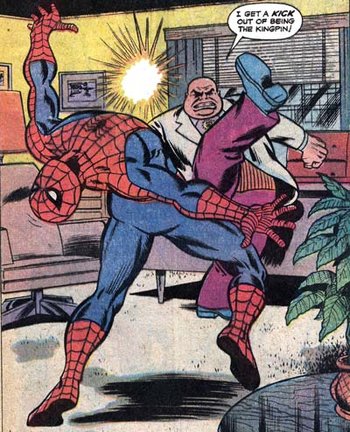 In this corner, an Animal-Themed Superbeing with Super Strength, Super Reflexes, Spider-Sense, and a Healing Factor. In the other corner, a Muggle businessman with questionable means of income.
Advertisement:

In the Sorting Algorithm of Evil, crime leaders and mob bosses are usually the domain of cop shows, and for super heroes a Starter Villain before true Super Villains start showing up.

Then you have these people.

These characters are often used in more mature and darker superhero stories, since tropes related to The Mafia usually fall into this, but even kids' shows sometimes have these characters.

To make this trope more flexible, works that don't involve superheroes can be examples, but still must be from stories that are similar to those, with the heroes having superpowers and supernatural abilities, or more conventional villains being also part of the cast.