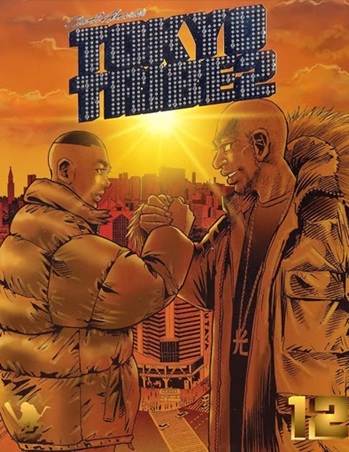 Come for the Goosh Goosh, stay for the brotherly love.
This is the other side of Tokyo, a Tokyo of a different color. There, various tribes are living.
Young men living in the city...the public of modern times builds a home out of corruption.
These young men of the sordid side of life, a side called "reality", are depicted here.
Advertisement:

The story of Tokyo Tribe is heavily based around the hip-hop and street culture of modern day Tokyo. It focuses on members of the Saru street gang (Shivuya branch in the original manga, Musashino branch in Tokyo Tribes). The Saru exist as a safe haven from the rampant crimes that occur between the Wu-Ronz of Bukuro and the Hands of Shinjuku.

When three Saru members turn up dead, Kai, a lieutenant within the gang, hunts for their assailants. He finds Mera, leader of Wu-Ronz and former friend, and accuses him of the murders. Their fight ends in the death of Tera, the Saru leader, and begins the Second Gang War. Meanwhile, a prostitute named Sunmi may either hold the key to bringing the two friends together or destroying all three gangs from the inside out.

Tokyo Tribe and the sequel Tokyo Tribes were both written by Santa Inoue. The first was published in 1993 and covered the events prior to the First Gang War. Tokyo Tribes was published between 1997 and 2005 in the magazine boon. Tokyo Tribe 2 was the anime based on the second manga and was directed by Tatsuo Sato and produced by Madhouse Studios. The series ran for 13 episodes between 2006 and 2007.