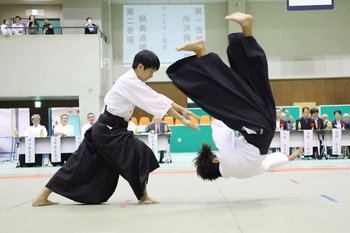 Aikido (translated as "the way of combining forces") is a Japanese martial art created by Morihei Ueshiba after the jujutsu style of a school called Daito-ryu. It is mostly based around hand strikes, wrist locks and pain compliance throws. It also includes training in weapons like short staves, wooden swords and daggers.
Advertisement:

Practitioners of the art are called Aikidoka. Equipment consists on a white uniform called Aikidogi very similar to the one used in Judo, only complete with ample black pants known in Japanese culture as hakama.

It was was created not so much as a martial art, but rather as a philosophic movement of universal peace and reconciliation. His creator Ueshiba was trained in judo, Sumo and several styles of jujutsu, but he chose Daito-ryu Aikijujutsu as the core of his new style and gave it the name of aikido in its honor. He stripped it of its most martial traits and added a strong religious background from a neo-Shinto sect named Omoto-kyo, and the result was something that he expected it would attract people in the world to utopia and compassion. It soon became official when the government of Japan started a movement to organize native martial arts and aikido was caught into the set. The art later expanded to United States, Europe and other countries, and although it never gained as much popularity as other, more classic martial arts, its presence can be felt.

Aikido is a controversial one among martial arts, as it could hardly be called a fighting style and absolutely not a combat sport, which is a constant source of confusion and/or discussion. The philosophy of aikido enforces little to no alive sparring or pressure testing, the basis of any effective hand-to-hand training, and instead works on prearranged, compliant drills and katas, often including staged katana attacks and ceremonial elements any Edo period samurai would be familiar with. (Its training does include the word randori, which in judo means alive sparring, but aikido understands it as a sort of semi-improvised exhibition with compliant partners.) Intuitively, this philosphy excludes competitions or championships too, as they are considered to go fundamentally against the art's message of peace and nonviolence.

As for why was aikido designed this way, it is unknown even what were Ueshiba's intentions. Some believe he de-emphasized actual fighting training because he expected all aikidokas to be already proficient in other martial arts, just like himself and most of his immediate apprentices; others believe he did so because he expected his style to be effective without aliveness in training, which brings the additional debate of whether aikido is effective or not (and if not, whether it should be, or how much should it change in order to be); and finally, others don't make such questions because they believe aikido is what it is. In general, aikido is an art with a lot to discuss about, though members within its community are not always open to it.

Although aikido is mostly governed by the Aikikai organization, led by Ueshiba's descendants, it is not a fully unified art, and there are many other small schools and ofshoots. These are the main schools in general.