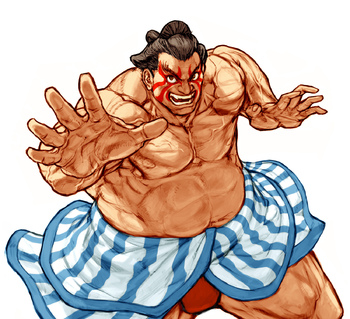 They are big and fat, they are strong and resistant, they are almost naked: they are sumo wrestlers!

Before anime and video games became mainstream, Japan was known through popular culture for four things: geisha, Ninja, samurai, and these big fighters known as sumo wrestlers. Big, rotund men whose objective is to throw the other man out of the ring, they are usually cast as Close Range Combatants per excellence in Fighting Games along the Boxing Battler, or as minor characters in different kind of stories.

It's Serious Business in Japan, where it could be described as the national pastime, and it is often interspersed with traditional Shinto rituals. Its rules are rather simple: you win by forcing your opponent out of the circular ring or forcing him to touch the ground with any part of his body except the soles of his feet. For this reason, matches usually only last a few seconds invested in big explosions of strength, making them short, dramatic and frequently spectacular, just what casual fans need to entertain themselves and keep watching. Indeed, although in the West it is often called a martial art and piled together with Judo and Karate, sumo wrestling could be much better described as a combat sport with religious undertones. While there are amateur associations in schools and colleges (as well as open circuits abroad), official sumo is a strictly professional competition which one dedicates his life to.

Contrary to popular belief, actual sumo techniques and training regimes are far more complex than it looks, as the open nature of the ruleset allows for more or less all wrestling moves and standing Judo techniques, including those grabbing the opponent's loincloth (which is called mawashi) for leverage. It also contains a rudimentary form of striking, as palm or forearm blows are legal, so knockouts do happen from time to time, but are rare because most Rikishi are more than ready to leave the ring a little roughed up. Most notably, although there are minimum height and weight requirements, there are no weight divisions, meaning David Versus Goliath is an everyday scenario and a big factor on victory. Sumo wrestlers are called sumotori or rikishi, and after a certain level they compete under a shikona, a ring name formed by a given name (usually theirs, if they are native, or a Japanese traditional name if they are foreigners) and a surname with a meaningful, often poetically powerful composition (for instance, famous champion Asashoryu's means "Morning Blue Dragon").

Fictional sumo can be Big Fun guys or Fat Bastards, depending on their place on the moral spectrum, and tend to be Big Eaters. Almost always Japanese, much like real ones, although a few Brazilian, European, Slavic, Pacific Islander and later Mongolian wrestlers exist.note The top of the field as of this writing is often dominated by Mongolians, and has been for almost two decades now; there are a handful of Caucasian rikishi and they tend to be Eastern European where folk wrestling is still popular, with former Bulgarian ozeki Kotooshu noteworthy as the first Caucasian rikishi to become an elder and open his own stable. Tend to have their hair tied in topknots and rarely wear much other than a pair of shorts and sandals. Of course, real ones wear other garments when not competing or training.

Believe it or not, sumo wrestlers were not always fat. Older sumo wrestlers, while large, were far leaner with more traditionally athletic builds.

This began to change around the 80's, when heavier wrestlers became the norm due to their weight making them harder to throw and their fat and mass making them more resilient to impact. Even modern sumo wrestlers are less fat than they appear. Most sumo wrestlers only have around 15-20% body fatnote While not impressive for most professional athletes, this is actually considered fit to average for men by the American Council on Exercise. and under that outer layer of blubber is an astoundingly muscular physique.

This Trope is almost Always Male. Traditional and religious customs prevent women from participating in Real Life sumo, and a fictitious Distaff Counterpart would likely look pretty silly. This has been challenged occasionally in modern times by some like Governor Fusae Ohta of Okinawa, but is unlikely to change in the near future.

The sport is Older Than They Think, with the current ruleset having undergone very little adjustment since the Edo period, and the bout before the emperor in 23BC between one Nomi no Sukune and one Taima no Kehaya is considered the Ur-Example of a "sumo" bout on record, though it was radically different from today's sumo (indeed, before the Sengoku period, "sumo" was instead known as Kakuriki); No holds were barred, all techniques save for biting were allowed and fights were occasionally fought to the death. Nomi no Sukune supposedly crushed Kehaya's spine and killed him with a stomp.

This trope is about characters that are designed about the concept and sumo wrestling in general.

One of the training exercises in "Getting Stronger" involves Bob Sumo Wrestling a penguin.

One of the training exercises in "Getting Stronger" involves Bob Sumo Wrestling a penguin.