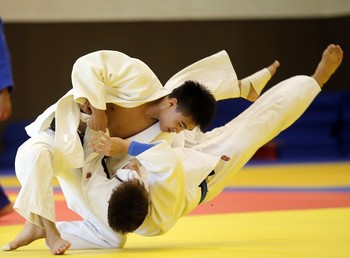 Maximum efficiency with minimum effort.
Judo (translated as "the gentle way") is a Japanese martial art and combat sport created by an educator named Jigoro Kano from several ancient jujutsu styles. It's essentially a form of jacketed wrestling where the objective is to throw an opponent to the ground, as well as immobilize or otherwise subdue him with pins, joint locks and chokes.
Advertisement:

Practitioners of the sport are called Judoka. Equipment consist solely of a white uniform called judogi or keikogi (sometimes abbreviated as "gi"), composed of a loose jacket and pants tied with a belt called obi.

A discipline spread out worldwide, its philosophy, pedagogy and Martial Arts Belts became the model for other modern Japanese martial arts, and the art itself became part of the Japanese educative system, with judo clubs and teams established in almost every school and university. With its most prominent feature being currently its competitive element, judo is an Olympic sport since 1964, and its ruleset is regulated by the International Judo Federation. As the originator of the sport, Japan usually tops the medal table (but not always), and their usual rivals are France, Brazil, Russia and South Korea.

Judo is an unified martial art, which means there is only one metaphorical school and one ruleset for all the competitions. There is, however, a minor modality called kosen judo, which is actually a remnant from the dark ages in which the art was still developing and had more open rules, and it still takes place in the Japanese universities in a league named Nanatei or Shichitei. Judo also gave birth to the martial arts of Sambo and Brazilian Jiu-Jitsu (BJJ) after its expansion to Russia and Brazil, respectively, and its connection can be traced in their similar techniques.

And no, the "judo chop" is not an actual judo move. Asking your judoka friend to do this move will result in a nasty look from said friend and may or may not cause him/her to throw you depending on how many times you ask.