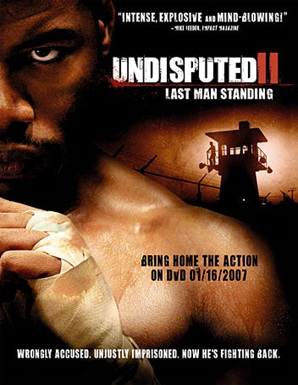 Undisputed II: Last Man Standing is a B-movie sequel to Undisputed, directed by Isaac Florentine from 2006.

This time, Chambers is upgraded from a Villain Protagonist to an Anti-Hero, and is played by Michael Jai White. In this particular setting, Mafia-types run the prison fighting organization of a particular Russian prison and make money off of it. They frame Chambers for drug use so he will be sent to jail and they can pit him against their own resident champion, Mixed Martial Arts fighter Yuri Boyka (played by Scott Adkins). For a while, Chambers refuses to fight Boyka, but they promise he will be freed. So he agrees. As you can see, it's fairly similar to the plot of the first movie.