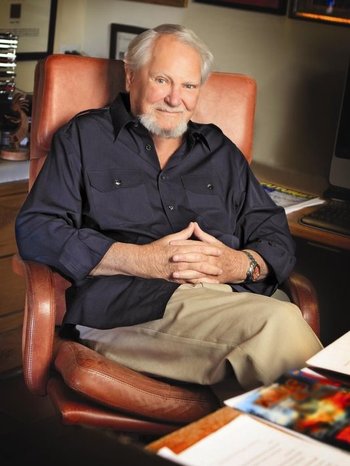 Clive Eric Cussler (July 15, 1931 – February 24, 2020) was an American Action-Adventure writer, often referred to as the grandmaster of adventure.

While he was most known for his Dirk Pitt Adventures series, he wrote over 50 different adventure novels in five separate series of books, although he more recently cowrote them with other authors. Cussler also has a son, Dirk, who often cowrites the series with him as well as a collection of classic cars, specimens of which often pop up in his books.

open/close all folders
Dirk Pitt Adventures
Clive Cussler's main series, which chronicles the adventures of Dirk Pitt, Special Projects Director of the National Underwater and Marine Agency, a government agency that specializes in exploring the ocean and excavating underwater artifacts. Later on in the series, he becomes the director of the agency as well as learns he has children who join the main character cast.
The NUMA Files
Cussler's second series, which focuses on Kurt Austin, the leader of NUMA's Special Assignments division. While Austin was meant to replace Pitt as the new protagonist, the two series ended up running concurrently.
The Oregon Files
Cussler's third series features Juan Cabrillo, leader of the mysterious Corporation and captain of his ship called The Oregon. The ship and its crew functions as a business that takes jobs for organizations such as the CIA.
Advertisement:
Isaac Bell Adventures
Cussler's fourth series is set in early 20th century United States and follows the adventures of Isaac Bell, an investigator for the Van Dorn Detective Agency.
Fargo Adventures
Cussler's fifth series centers around professional treasure hunters Sam and Remi Fargo.

Works by Clive Cussler with their own pages include:

Other works by Clive Cussler contain examples of: