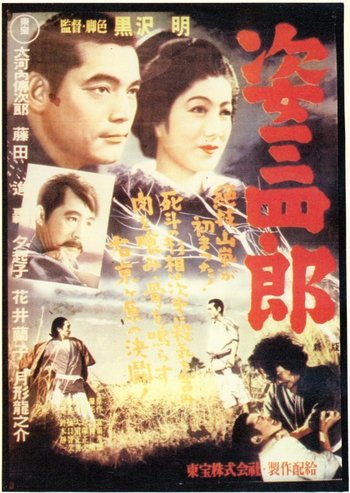 Sanshiro Sugata is a 1943 film from Japan directed by Akira Kurosawa.

The setting is 1880s Japan. Sanshiro Sugata arrives in an unnamed city looking to study at a school of jujitsu. He finds such a school, and goes with its members when they leave to pick a fight with Yano, a local master of the jujitsu spinoff of Judo. When Yano proceeds to beat the bejesus out of each one of his rivals in turn, Sugata sees the light and joins Yano's judo school.

Something goes wrong, however, as a Time Passes Montage reveals Sugata to have become a wild youth getting into fights in town. He returns to Yano's school, and after a test of endurance and a moment of clarity, he is re-admitted. This time, he becomes a real judo master. Challenges still await, however, in the person of Murai, a local jujitsu master who wants to fight Sugata; Murai's daughter Sayo, who falls in love with Sugata without knowing who he is; and Hideki, a scowling man who wants to destroy Sugata and take his place as judo champion.

Sanshiro Sugata was the debut feature for Kurosawa, who had previously worked as an assistant director and script doctor. It soon received a sequel, Sanshiro Sugata Part II.

This was the first Kurosawa film for Takashi Shimura, who plays Murai; he spent the rest of his life, until Kagemusha in 1980 the year before his death, appearing in Akira Kurosawa movies.