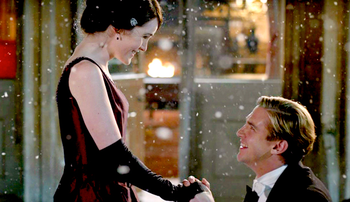 A proposal in the snow.
"Snow makes everything more romantic."
— Jane Villanueva, Jane the Virgin
Advertisement:

A classic romantic setting is two lovers alone in a gentle snowfall. Bonus points if the first snowflake falls immediately after they get together. Almost mandatory in a Christmas Episode, or if lucky, a Valentine's Day Episode.

A person alone is cause for sympathy and especially one that's Prone to Tears.

Snowed-In and Umbrella of Togetherness can bring this trope about. If it's raining instead, it's Romantic Rain. Contrasts with Flames of Love and Electric Love. Western cousin to Cherry Blossoms. A subtrope of Empathic Environment.