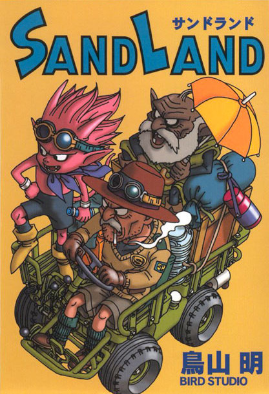 Sand Land is a one-volume manga series published by Akira Toriyama in the weekly Shonen Jump in the year 2000.

Sand Land is about a desert wasteland where humans and demons coexist, although not peacefully. While the demons do not kill, they enjoy making trouble for humans. They are reduced to stealing precious water from the king's supply... Then a human sheriff comes and requests their help in finding the elusive Phantom Lake... Though the King's army is determined not to let him find it. Thankfully, the sheriff and his allies manage to steal themselves a tank to help them on their quest.