Manga / Samurai 8: The Tale of Hachimaru 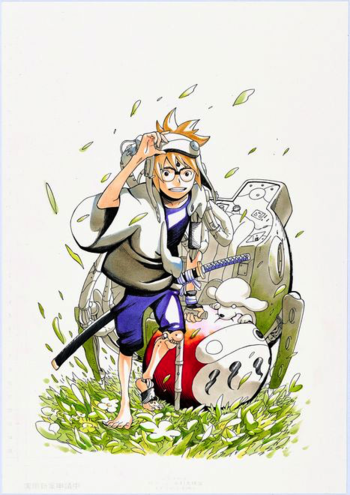 Samurai 8: The Tale of Hachimaru is an action adventure Science Fiction Shonen Jump manga series written by Masashi Kishimoto, who is most famous for Naruto, and illustrated by Akira Okubo.

Hachimaru is a weak and sickly boy who has been connected to a machine all his life, and dreams of being a samurai, a cybernetic being who fights to protect the galaxy. His encounter with Daruma, a cat samurai, allows him to receive the power of the war god Fudo Myo-o and become a samurai, kicking off his adventure.

The series was launched in May 2019, with expectations from Kishimoto that the manga would last ten volumes or more. Despite this, the manga ended in March 2020 with five volumes and 43 chapters.

Not a sequel, or otherwise related, to Samurai 7.

Samurai 8: The Tale of Hachimaru provides examples of: