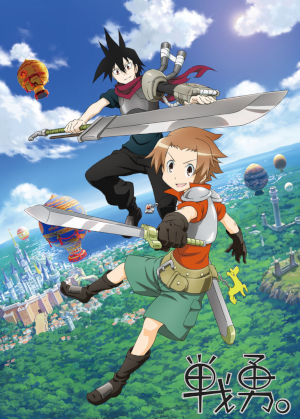 One day, without warning, a huge hole appeared in the world. And from it, emerged many demons. The king sent out a call to arms for the descendants of the great hero Creasion, who a thousand years ago sealed away the Demon King Rchimedes, as the world's only hope... All 75 current possible descendants, that is. And then this happened, and then some other stuff happened, then this other crap... What will happen? Do we care?

The narrator doesn't, for one.

But... The hero we follow is Alba, who sets out to slay the Demon King, but may find the Demon King is more powerful than he thinks... or less powerful... maybe even in need of a hero... or he might wind up being thrown in prison for completely unrelated reasons. And while Alba is a fairly normal person, the same can't be said for those around him.

A unique form of gag-based manga (and its continuations) by Haruhara Robinson, watchable on NicoNico Seiga and later serialized under Shueisha's Jump SQ, Senyuu. has been adapted for the Winter 2013 Anime season, with 13 five-minute episodes planned, as well as a second season of the same size for July 2013.