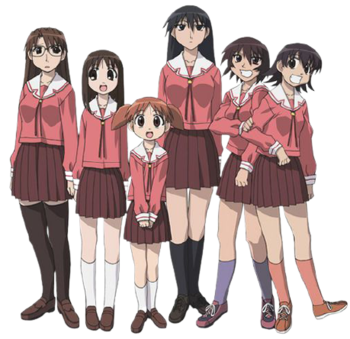 Just a bit more moe than some others.
"During the development phase, it was said that 'Caster turns into a loli with hyper power', but we only need one loli!"
— Taiga, Fate/stay night: Taiga dojo #22note Ironically, a loli version of Caster actually appears in Fate/Grand Order.
Advertisement:

The Token Mini Moe is a young or young-looking member of a cast designed to appeal to one of two predominant demographics. The first is those who simply find the character absolutely adorable and/or endearing and feel protective towards him or her. The character allows this sort of fan to act as and live out the role as an idealized older brother or sister (or parent) cheering their little sister on and helping her achieve whatever goals the setting deems important. The second are the Lolicons / Shotacons, who take an erotic or romantic interest in the character. Needless to say, these two groups are often at each other's throats over the character.

What defines a Token Mini Moe is a number of factors. First, they appear prepubescent, regardless of whether they are actually children or not. Why someone so much younger appearing is mixed in with a group of older looking people may be addressed, but it's just as likely that it will be noted and then the story will move on. In a harem series where they are used as a love interest, they will almost never be the main one and are frequently overshadowed, their arcs amounting to a Precocious Crush that is gently rebuffed. Since they are the Token Mini Moe, if there are other similarly young looking characters in the cast then it is probably not this trope.

Compare Tagalong Kid and Kid-Appeal Character, who are kids designed to act as Audience Surrogates for younger viewers.

In anime, these characters have a tendency to be referred to as "token loli" and "token shota" (if they are a token), but these words can imply sexualization of children, so please don't use them in this website. Hence, this page was renamed from Token Loli (that and the fact that, because of the definition shift, female examples of Kid-Appeal Character and Tagalong Kid are also referred to as token lolis).