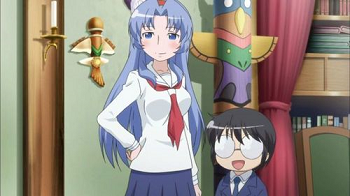 Then it all went downhill
You grew tall, I stayed the same
I guess that's just puberty
Making us boys always play a losing game
— "School Uniforms", The Wombats
Advertisement:

Puberty can affect a teenager in many ways, and in the case of the Tiny Schoolboy, it's not always good. Males are expected to be taller than females, so this character is rather strange.

These small teenage boys (particularly in high school) are the target of bullying and teasing from other students for being below-average, (probably) struggle to find a girlfriend because many girls want a Tall, Dark, and Handsome boyfriend, and dread falling into the Tiny Guy, Huge Girl category.

This causes some of them to lash out and become aggressive, short-tempered and loud-mouthed to show everyone that they're just as good as any normal-sized guy for any normal-sized girl. Expect some of them to have a taller best friend as a human shield or as a good tool for threatening people he's rubbed the wrong way (usually for being insulted about their height), although these characters usually end up as the Dumb Muscle, meaning that this Tiny Schoolboy is probably a pariah to everyone except for the ditzy characters.

Some versions are usually the Attention Whore and can be all mouth and no legs. In many cases, it's seen as either annoying to others or just Endearingly Dorky. If their boasts turn out to be true, they become the Pint-Sized Powerhouse or just Badass Adorable. In some cases, expect these versions to befriend the Huge Schoolgirl, or be dating the Huge Schoolgirl because they're the only ones that understand each other and see the person instead of the height.

Other versions of these characters are usually the Nice Guy who respects others and is a Friend to All Living Things. Unlike the aggressive version of their characters, these Tiny Schoolboys actually get the attention from the girls... but not for being studs. Expect these types to be constantly the target of the school bullies and the jocks that struggle to get girls.

The one thing that the types can relate to is that they’re constantly confused with children by adults, or are too short to do certain things that other teenagers can do (expect them to be rejected from theme park rides).

The inverted Distaff Counterpart to Huge Schoolgirl. Not to Be Confused with Dawson Casting. A Sister Trope to Teens Are Short. Also see Pint-Sized Kid for the preteen/children idea as a whole. If they're lucky, they eventually go through the I Got Bigger trope.