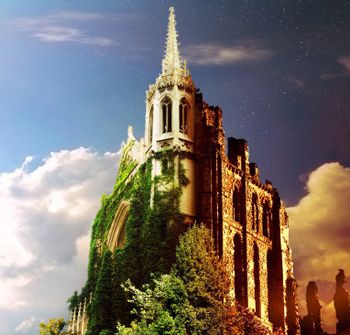 Don't worry about anyone looking over your shoulder. Only those with Sight - the ability to see things for what they really are - can read the true contents of this letter. The Blind, those lacking sight (primarily made up of mundanes, the nonmagick folk) will only see an ordinary letter to one's lover.

Congratulations! You have been accepted to the Academy of Merlin, located northeast of Cardiff, Wales. Perhaps you did not apply to our school - perhaps you were chosen instead. Regardless of the reason, you are now set on your path to come here. Do not worry about anything but travel expenses - our aim is to educate the next generation of magic, not empty the pockets of their parents.

Perhaps you have not heard of the Academy, which is unusual but not unheard of. We are a prestigious magick school with the rather famous Merlin's Oak in the center of the campus. You may know the legend of Merlin being turned into an oak tree by Vivienne, his treacherous apprentice. That legend is far more than mere fiction, my dear student. Merlin's power makes the campus the perfect environment to learn magic from our brilliant professors.

In the event that you are from a mundane household, another letter will follow this one shortly, saying you have won a scholarship to a highly prestigious academy for you to show to your guardians.

You will find enclosed the student handbook,

a list of school supplies and directions to the school itself. Please read this handbook in its entirety, as there is important information enclosed within.

I look forward to seeing you at the beginning of the year, my dear student.
— Headmaster Louis Soulstone
Advertisement:

The Academy of Merlin is a fantasy school roleplay that takes place in modern-day Wales, in a sort-of made-up area northeast of Cardiff. Students from all walks of life attend the Academy to study under the professors of Headmaster Louis Soulstone, the current headmaster of the Academy. However, all is rarely well at the Academy. With factions of characters from a discriminatory government bent on imposing their own rules on nonhumans, a not-so-secret secret agency dedicated to bringing justice to the magick world, three towns full of colorful shopkeepers and dangerous gangs, and a mysterious terrorist organization with their own agenda, life at the Academy is rarely dull.

The old forum on Gaia Online is located here

, while the new one is here

The Academy of Merlin contains examples of: