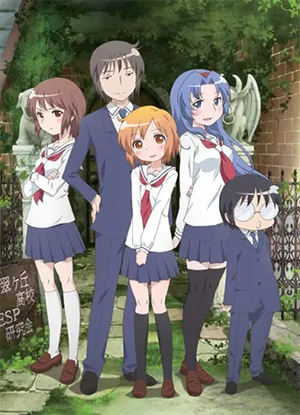 Kotoura-san is a web-published yonkoma manga by Enokids which has been adapted into an anime directed by Masahiko Ohta for AIC in the winter 2013 season. Enokids ended the series in 2015 in favour of the new series Magical Girl Paracel.

The story follows Haruka Kotoura, a fifteen-year-old telepath who can't turn her ability off. As a child, she naively blurts out sensitive information and other people's private thoughts. This causes her to be unjustly labelled a compulsive liar; her friends and classmates reject and bully her, and her parents divorce because they cannot understand her special ability or how to deal with its repercussions. After years of persecution and ostracization, she transfers to a new high school, where she meets Yoshihisa Manabe, a good-hearted boy who is transparent, honest, and not scared of her ability.

The series is available on Crunchyroll

, or Netflix, but might not be available in your region.

A sub-only DVD release by NIS America was released in August 2015 under the title of The Troubled Life of Miss Kotoura.

Think you can try lying to a mind reader? Think again!

Think you can try lying to a mind reader? Think again!