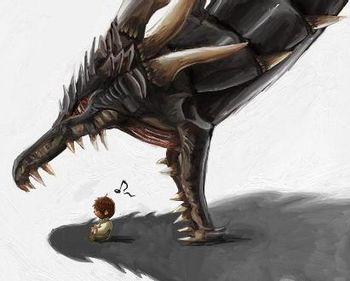 "There's always an Arquillian Battle Cruiser, or a Corillian Death Ray, or an intergalactic plague that is about to wipe out all life on this miserable little planet, and the only way these people can get on with their happy lives is that they DO! NOT! KNOW ABOUT IT!"
— Agent Kay, Men in Black

So, the hero has found the giant factory belonging to the Big Bad. He enters with his True Companions and finds weapons that could kill thousands or maybe even millions, all built by and being built by the locals. While the hero believes that the locals all knew about the Big Bad's plan and were helping him willingly, a few questions from The Heart clears up the matter — the locals simply think the weapons are harmless machinery that will be used for building houses and/or farming.

This trope describes situations where somebody uses someone to make or do something by lying about what exactly it is that they're doing, or assuring them that it's for the greater good. It could be something as simple as stealing plans or moving an item to another location, or something major, like building a Doomsday Device or breaching a boundary — if the Big Bad plays on their ignorance to make them do something; it's this. This can often result in a Heel–Face Turn or My God, What Have I Done?. See also Evil Plan, Nice Job Breaking It, Hero!, Awful Truth, Redemption Equals Death and Ambiguous Innocence. Characters made of Ignorance Is Bliss include the Noble Savage.

Compare Dumb Is Good. Not to be confused with While Rome Burns, when everything is going horribly wrong but everyone responds to it with denial.