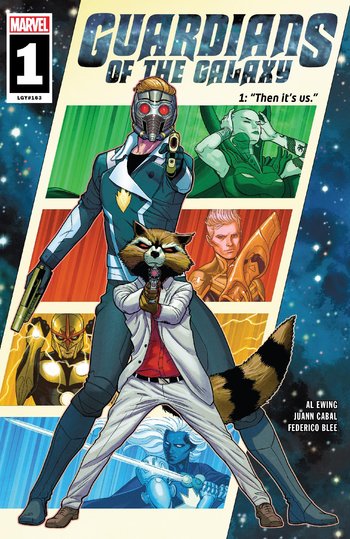 The wheel has turned.
Advertisement:

Guardians of the Galaxy is a 2020 relaunch of the Marvel Comics team, written by Al Ewing and art by Juan Cabal.

It's a tough time for the universe. The Kree are divided with a civil war, the Shi'ar are trying to put a new Empress on the throne, and the Skrulls are acting weirder than usual. And there are a bunch of angry space gods rampaging around killing everyone they come across. The galaxies need heroes, they need guardians...

Unfortunately, the Guardians of the Galaxy are split up about it. They've had a rough time of it lately. Some of them just want to sit down and recuperate, and some of them don't. But there's not anyone else around who could do it, so it looks like it's up to them.

Issue 13 sees the team being deputized by the Galactic Council in the wake of major cosmic upheavals with a significant expansion in the roster, including Wiccan, Hulkling and Doctor Doom, among others. Juan Frigeri also takes Cabal's position as the regular artist. The book also began a crossover called The Last Annihilation.

Guardians of the Galaxy provides the following tropes: